Sometimes I’m amazed by the connections I make while playing online. I meet very creative people who inspire me in new and interesting ways. One such connection is James Moreno. Who is this creative shutterbug? The genius behind FOTOJADAMO, a fellow Texan, and all around nice guy. 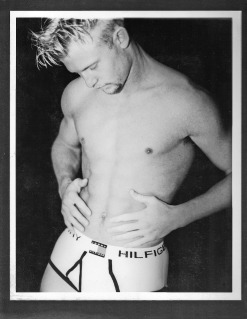 How long have you been capturing the world around you, either professionally or from the first time you picked up a camera?

My photographic curiosity started back during junior year in high school. After graduation, I started to become more adventurous with male models in the summer of ‘98.  My very first subjects were popular jocks, the epitome of every gay man’s fantasy.  I found it intriguing how open-minded they were about posing in underwear for me.  I was shooting exclusively in black and white film using lengthy chemical baths and expensive paper.  I later invested in a digital camera in 2002, and created the name JADAMO, which is done by simply adding the first two letters of my full name: JAmes DAniel MOreno together and the rest, as they say, is history.

Recently, in 2011, I suffered a horrible blow to my photography career when 13 years of my work was gone in a blink of an eye.  Someone broke into my van and stole my equipment, my camera, and 13 years of vital documents and releases. I knew I needed to work harder to start over again.  I made my comeback in January this year and decided I’d go far beyond my own expectations.  My goal is to reclaim as much of my “unusable photographs” as possible.  My comeback portfolio is an orgy of avant garde:  fashion, design, art, lighting, Photoshop, male models and sex.  It’s an attempt to extricate myself from the mass produced and so-called “shock-value” photographers that have been flooding the scene as of late.  My goal is to give life and recognition to my body of work that has its own trademark FOTOJADAMO appeal.  If you know a photo was taken by me, than that’s all the redemption I need to keep me going. 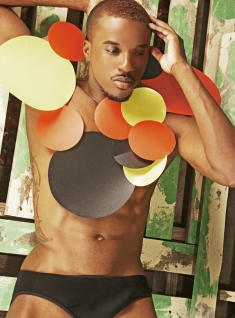 What/who is your favorite subject? Do you find humans difficult or intriguing to shoot?

By nature, I am a people watcher.  What else can be more lively and diverse than us?  Sure, animals and nature can be exciting, but from my perspective, humans are strange, fucked up creatures and I’d be a fool not to capture them.  I would never pose for me, because I’d look and feel silly wearing the things I’ve had my guys wear. And that’s why I have a higher level of respect for my models.  I can trust that they’ll deliver a killer photoshoot no matter what. What I find intriguing about photographing people is that it will always be difficult, especially for someone like me who must work with the bare minimum like budget lighting, and baby powder for make-up.  When anything can go wrong, it usually does.  But I prevail and accept the way things are, or I’ll keep working smarter until I succeed or die trying.

If you could choose any one person in history, alive or dead, to do a full photo shoot of, who would it be and why?

Ace of Base.  They are a HUGE influence on my vision, and also of character.  To have the opportunity to photograph all four original members would be a major highlight of my career.

Do you have a fantasy location you would love to shoot? If so, is there a specific subject to go along with it?

I would love to float amongst the clouds with my camera.  When I was prepping for the 2012 Austin Fashion Week Mash-Up Competition, I knew I needed photographs of clouds to supplement the background of my submission.  I spent weeks in June aiming my camera to the sky where plenty of cumulus clusters hovered above.  I would recall my first plane ride when my eyes witnessed clouds from miles overhead.  The setting sun created silhouettes from behind pure white cumulus clouds as it painted their bold, soft edges with splashes of reds, oranges, and yellows.  The occasional sun flare would peer between the gaps with its strong rays and blinding light, an epitomic scene associated with visions of The Heavens.  I sat there, next to my small window, tears flowing heavily until the sun disappeared.  It was the most beautiful moment of my life.

Connect with FOTOJADAMO on Facebook, or scan the code.

Want to know what's going on in my writing world as it happens? Don't worry, you'll most likely get less than one email per month, unless I'm able to start writing more. For now, this newsletter will be to alert you to new releases and upcoming appearances. Just click here and you're in!